Voters share their thoughts and feelings on the Nov. 6 election.

By Alex Harris and Sebastian Lindner

Where do I go, what do I do, or who do I vote for? These were questions pondered by perspective voters who showed up or thought about voting in the Nov. 6 midterm elections.

Many who lined up at polling stations or mailed in absentee ballot votes were first time voters. HSU student Yesnia Celis  said she sees this vote as empowering.

“I feel like it’s really important and it’s like a really crazy and emotional experience for me,” Celis siad

Celis is not only a first time voter but also represents many who do not have the privilege to vote. She frames this as her reason for voting on Nov. 6 and why she votes in general.

“My reasoning (for voting), was that I have friends who are immigrants,” Celis said. “They do not have a say in this, so I am representing them.”

Similar to Celis’s intent, HSU senior Maddy Tervet believes she is voting for something greater than herself. Tervet also said this is a big turn-around from the last election

“There is a lot at stake with this election because of all the turmoil after the last,” Tervet said. “I think it’s a time where we’re seeing more people interested in voting and in politics.”

Victor Ahumad, a senior psychology major at HSU, also took some solace in the voter turnout.

Although many had their own reasons to show up to the polls not everyone had the resources to make it there. The North Coast People’s Alliance, saw this problem and decided to help, in the form of a voter van. The voter van took people to and from the elections office in Eureka from HSU’s library circle.

Tamara McFarland, a volunteer van driver from the North Coast People’s Alliance, said many were ecstatic to see this resource on campus.

“Everyone was so happy they were giving us high fives and thumbs ups,” McFarland said.

Although some resources were provided for people to attend the elections, some like McFarland felt as though all voters were not 100 percent prepared for the elections.

“I think especially the propositions were confusing,” McFarland said. “But there has been some good conversation (between students) happening on the bus.”

Some were not as lucky as those who had these conversations and thusly felt woefully unprepared. Humboldt State student Atalia Cohen, said even when her friends had an election party the night before to research some of the candidates and propositions, they all still felt confused.

“I did not feel at all prepared,” Cohen said.

Although Cohen felt like her vote was important, she explained that she did not receive a sample ballot through the mail or any information even though she was supposed to be an absentee voter.

“I never received anything in the mail,” Cohen said. “I feel like it was even difficult to read all the information that was even presented online because it’s made to actually make you feel confused.”

Though some felt confused or mislead on what to vote for, many still believed in the importance of their vote.

Humboldt State students and friends Ashley Martinez and Vanessa Echevarria were sparked to go to the polls. Martinez voted in order to combat some of the politics that she saw as toxic in her hometown of Inglewood, California.

“Our mayor has been raising the rent in the city, along with pushing for the new (NFL) stadium being constructed which we don’t want,” Martinez said.

Martinez and Echevarria are apart of a large group of people who were either convinced to vote by friends or something that was affecting them personally. 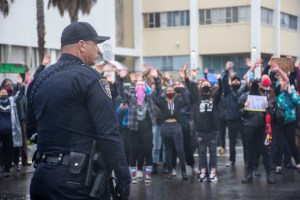