We are still in

Mayor, governors, college and university leaders, businesses and investors are coming together to declare that they will still support the Paris Climate Agreement to combat climate change. President Trump’s announcement to withdraw the U.S. from the Paris Climate Agreement was met with widespread criticism, and local and state governments are taking responsibility to decrease greenhouse gas emissions in response. Susan Ornelas, the mayor of the City of Arcata, gives her thoughts on this growing international community known as We Are Still In. 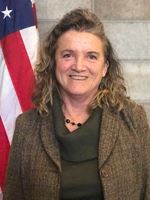 Q: When did you first hear of We Are Still In? Was there an envelope in the mail?

A: No, I came across it on Facebook or the internet. I just saw that, and saw that mayors were signing on and I thought while looking at the Paris Accord, “Well the city of Arcata has internal documents that direct us to do these things already!” So it wasn’t a big decision to have to make, it was kind of like, “we’re in!” We’re already in, and I just thought about the citizens and that they would like to see the city of Arcata on this list. So I just contacted the city manager and Mark Andre (Director of Environmental Services) and said, “yeah, lets sign up, let’s get our name in there.”

Q: How was it implemented? How did you get your name signed on?

A: Well we just wrote a letter based on, we have kind of a legislative platform that if things come up that fit the platform that we already approved, the mayor could just send a letter. So I just sent a letter saying the City of Arcata is still in on the accord, and like I said, and internally I knew that our policies were already working towards these things so wasn’t too difficult to do.

Q: What has the city and university done to contribute to the “We Are Still In” agreement?

A: The city and the university are working well together right now which is a contribution in itself. We have a lot of good coordination and the university has made some strides I feel like. The city has made strides like years ago and we’re still making further strides into zero waste and understanding that…The university did the whole sustainability analysis of themselves…that whole effort of reducing waste, more sustainable systems, less carbon use, you know. I think as a society many of us are trying to reduce our carbon use. Transportation is one of the biggest challenges for this county.

A: Yeah that will help, although you really have to look at where you’re getting your electricity and is that a good source. Is that a carbon free source, is that non-polluting as much as possible. It’s good that solar has gotten as inexpensive as it has.

Q: Is that probably going to become the norm at some point?

A: “Yeah, and then do you know about the Community Choice Energy Program? That’s another thing the city of Arcata is involved in. The whole county is actually involved in this…. So the Community Choice Energy Program is that Humboldt County now runs or purchases its own energy. It’s still run through PG&E but it’s called Community Choice Energy…. But this also goes in with the whole Paris Climate Accord because the county now is choosing more renewable sources of energy and investing in local solar arrays and things like that. So that’s what called a Joint Powers Agreement, a J.P.A., which means the county and the cities have joined together and we all sit on a board, and we’re overseeing this Redwood Coast Energy authority purchasing now energy for the county, and we’re getting it a little cheaper, and we’re emphasizing renewables. So that’s another way that we’re working to sort of you know weave ourselves out of carbon. And then another thing that I would say that the City of Arcata does is we study some carbon sequestation in like marsh lands because that’s another good source of carbon sink. So the City of Arcata is investing in marsh lands now, working with the university, with students doing studies and things of carbon sequestration in marsh lands. That’s another thing that we’re interested in that we work towards. We see the value of them. I mean there used to be people would just drain marsh lands and farmed it, but we see the value in them for bird habitats for ecosystem diversity and…

A: Yeah kind of like estuaries. You know a marsh land, yeah.

Q: In your opinion why do you think We Are Still In holds such significance for our community?

A: Well you know I think because Arcatans really take pride in their environmental stances and they wanted to feel like they supported this. They didn’t want to just give this up after the whole country had, you know, promised to join and then we pulled out, and I think there’s something powerful about all these mayors getting together because the mayors are closer to the people and they’re joining forces and saying whatever is going on at this level we’re still doing this. We still believe that we want to make sure we leave something for our children and things like that. So I think the mayors are speaking more for the people and that’s also kind of heart warming but also powerful stance. I think people liked that too. I think it’s important and people want to feel that we’re not going backwards, you know, I think that would be depressing for people. There’s ways we’re feeling like were watching our society and we are going backwards. But with this particular thing with the mayors coming forward and you know, saying “no, we’re still in”, that at least didn’t go backwards for people.

Embrace the idea of spending another year in isolation

The COVID-19 pandemic is far from over

Music of the Moment 9

The dangers behind marine debris

The staggering cost of commercial litter.